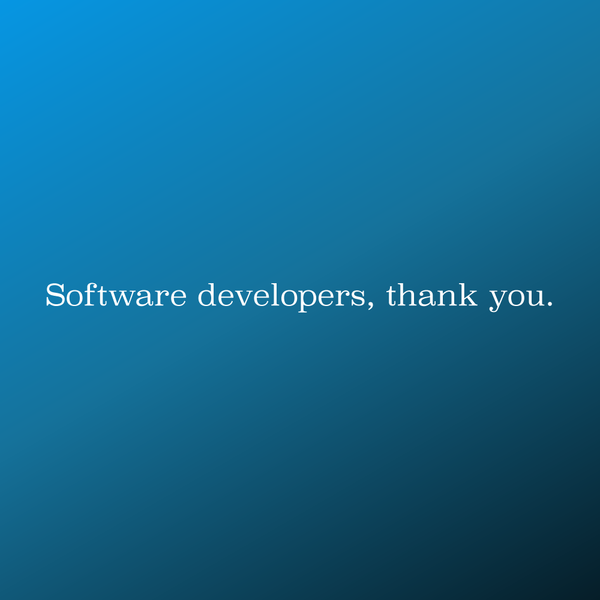 Software developers of the world, thank you.

Something dawned on me the other day - something pretty amazing.

So I've been a Software Engineer, Developer - whatever you want to call it, a good chunk of my life. My dad introduced me to coding back in the early 90s, I studied Software Engineering in University, and now I run my own Custom Software shop. So software development has been a big part of my life and I would say I'm pretty proud of where I am.

However, something dawned on me the other day. I've really been standing on the shoulder of giants and what's crazy is - so many of us have.

Let's take Ruby on Rails for example. This is my web framework of choice. Because of Ruby on Rails, I don't need to understand when someone types in a URL in their browser, how that sends a request to my code with all the information I need to build a web application. I just use that information and I'm on my way.

And you know what, it doesn't stop there.

This is the thing - as a software developer, you leverage other people's work so much. You use frameworks, libraries, code snippets - you name it. Let's take a closer look.

As an informal, non-scientific experiment, I decided to pick one of BiteSite's biggest projects and I wanted to see how much code was ours and how much wasn't. Remember, this is pretty informal, but it should give you an idea

(for the technical readers, I took the size of our Ruby on Rails app folder for "Our code" and took the "node_modules" and "gems" folders for "Library and framework code")

Now this is not super scientific, and granted we're not using every bit of the framework - but it's just a small indication of how much code we're using that we didn't create ourselves. I would also say that this is probably quite typical of most applications.

I can't count the number of times a client has come to me and said "Can you do this?", I say "Probably", Google it and within minutes have an amazing solution because some developer out there coded an amazing library.

And it doesn't stop there.

The benefit goes way beyond making a software developer's life easy or making them look impressive. Because of these libraries and frameworks, the developers using them are able to build incredible apps that are the foundation for amazing businesses and companies that change the world.

And here's the kicker. They do it for free.

That's what really blew my mind as I thought about this more and more. A lot of massive, super successful companies that change the world build their software, their company, their success using free frameworks and libraries.

Don't get me wrong. I know there is sometimes a bigger business motive for some of these libraries and frameworks, but for the most part, I think software developers have developed such an incredible culture of sharing and collaborating for the greater good. I can't think of another industry that does it so well.

So with that - I think it's time we all thank this incredible group of people who continue to provide answers to our problems, who allow us to build amazing world-changing products and businesses, and who ask for nothing in return.

Thank you to all the incredible software developers out there who have allowed me and so many others to get to where we are.