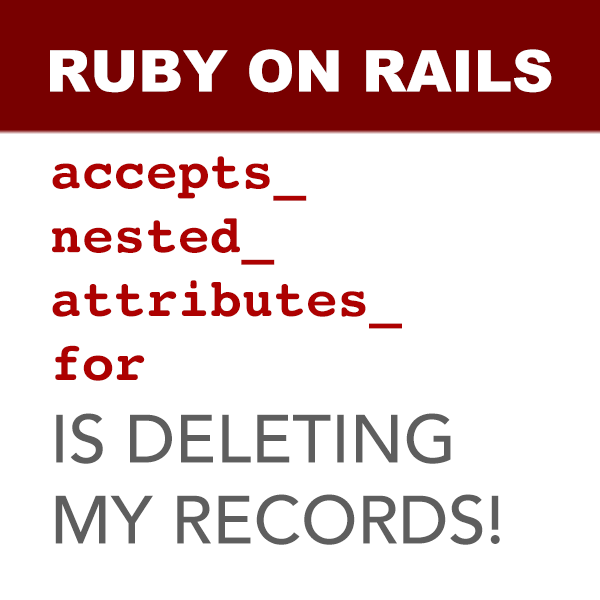 Ruby on Rails accepts_nested_attributes_for is deleting my associated record!

So I've been programming Ruby on Rails for about 9 years now and I'm still learning new things everyday. This is one that definitely caused us some issues.

So here's the setup. We have a User model

And we have an associated Profile model

Notice that on the User model, we have

If you don't know what that does, it basically allows you to run creates and updates on the User model and Profile model in one single call. So for example, you can do this:

If you set up your form correctly and with proper strong params, you can put the User and Profile all in one single form for the user making it easy to update both models at the same time. BUT BE VERY CAREFUL!

If you have a very similar setup to what we had, basically a one-to-one relationship, then you have to be very careful of your update calls. If you call update on the parent record (in our case the User record), and pass in child attributes, if you DON'T pass in the ID, it will actually delete your existing child record and create a new one!. Yah. I didn't know that either. Try it out, and look at your Rails logs, you'll see a SQL delete statement followed by an insert.

Again, this is for one-to-one relationships only while doing accepts_nested_attributes_for updates.

If this is the behaviour you want, obviously you're ok. But for us, we wanted to update the existing child record rather than destroying what already existed.

If you want to update the existing record, there are two things you can do.

Solution 1: Pass in the ID of the child record

While I haven't tried this myself, if you pass in the child record's ID, it should perform an update rather than a delete/insert.

Solution 2: Use the 'update_only' option

This is the solution we went with. When declaring your accepts_nested_attributes_for, you can pass in the update_only option:

Learn something everyday. Hope this helps out some peeps. Thanks for reading!