Over the past few months, we've been writing articles that have to do with working with video productions companies. We talked about the time it takes, the cost, and the value you can get from it. However, we know that not everybody has the money to work with an external company. We also know that some marketers are just more interested or keen to produce something themselves. There is a certain sense of satisfaction when you learn something new and create something hands-on yourself. After all, it's a big reason for why we do what we do at BiteSite.

With this in mind, we thought we'd put together some articles on some do-it-yourself advice and techniques. In this article, we're going to talk about shooting better interviews.

Testimonial videos are a great place to start

If you're just getting into video production, testimonial videos are a great way to start. They are sometimes also referred to as unscripted videos, documentary-style videos, or talking head and B-roll videos. These are videos that feature people talking about a product, a service, or a company edited together with some music and shots of what they are talking about.

A good reason to start with testimonial videos is they are a much lower risk production - they require a lot less input and can get you just as much output. On the input side, planning a testimonial video can reduce the amount of work you put in up front. You don't have to secure shooting locations, you don't have to cast actors, you don't have to get set dressing and wardrobe, and you don't have to hire a hair and make-up artist. Not to mention your time that you spend in concepting and scripting (or question writing) is usually a lot less when compared to scripted works. So there is a lot less to think about. On the output side, the video can be just as powerful if not more powerful than scripted works. Hearing genuine testimonies from real people can have a big impact on your audience. Your audience a lot of times won't care that the location you shot in was plain looking, or that your interview subject wasn't lit that well - they will focus on the message and what your interview subjects are saying.

Yes, there are testimonial videos that are super high quality and have huge amounts of production put into them, but when you're starting out, you can get away with minimal setup.

For these reasons and more, a lot of times when we deal with first time clients, we start with a testimonial video.

So, we recommend that if you're starting out, you start with a testimonial video as well.

The role of the interview

When it comes to testimonial videos, the heart of the production is the interview. It's the driving force of the edit and the final video and the better your interview, the better the video will be. We plan to do a whole piece on interviews in the future, but let's briefly talk about why it's important to get a good interview.

Yes, testimonial videos feature a lot more than just an interview. They'll have music, maybe some motion graphics, and lots of B-roll shots. However, these are usually elements that are there to supplement the main event - the interview. A lot of times we use motion graphics or B-roll shots to cover up edits or reduce monotony, but in the final edit the audience doesn't notice that. The audience sees a nicely constructed video in the end and the main thing they'll probably notice is the interview - and that's a good thing.

However, the way around is not true. If your interview is bad for whatever reason and you're producing a testimonial video, things like motion graphics and B-roll won't be able to save it.

So that's why it's crucial to get a good interview.

It's important to note that there is a lot that goes into getting a good interview. There are things to do in pre-production such as research, concepting, messaging, question writing, pre-interviews and more. We will cover those in future posts. In this post, we're concentrating specifically on the technical aspects of shooting an interview - in other words, making your interviews look and sound better.

So here are 3 tips for shooting better interviews.

When people start getting into shooting video, it's a natural tendency to be afraid of close-ups and stay far way from the interview subject. However, getting a tighter frame on the interview subject makes the interview more intimate and helps the audience connect with the person speaking. Now you don't want to make the subject feel uncomfortable, but try to get as close as you can to get the framing right.

So pick up your tripod and move it closer to the subject.

If you happen to have a zoom lens, you can also zoom in as far as you can. However, if you do this, be sure you are using optical zoom rather than digital zoom.

If you're unsure about how close, a "medium close-up" is a good place to start which includes the subjects head and shoulders.

After you've gotten your frame tight enough around your subject, the second thing you can consider is the rule of thirds. If you don't know what that is, there are a ton of tutorials you can find on the internet about this, but in short, you divide your frame into 3 sections horizontally and vertically and then place your point of interest on the division lines. For an interview, your point of interest will be your subject's head or eyes. 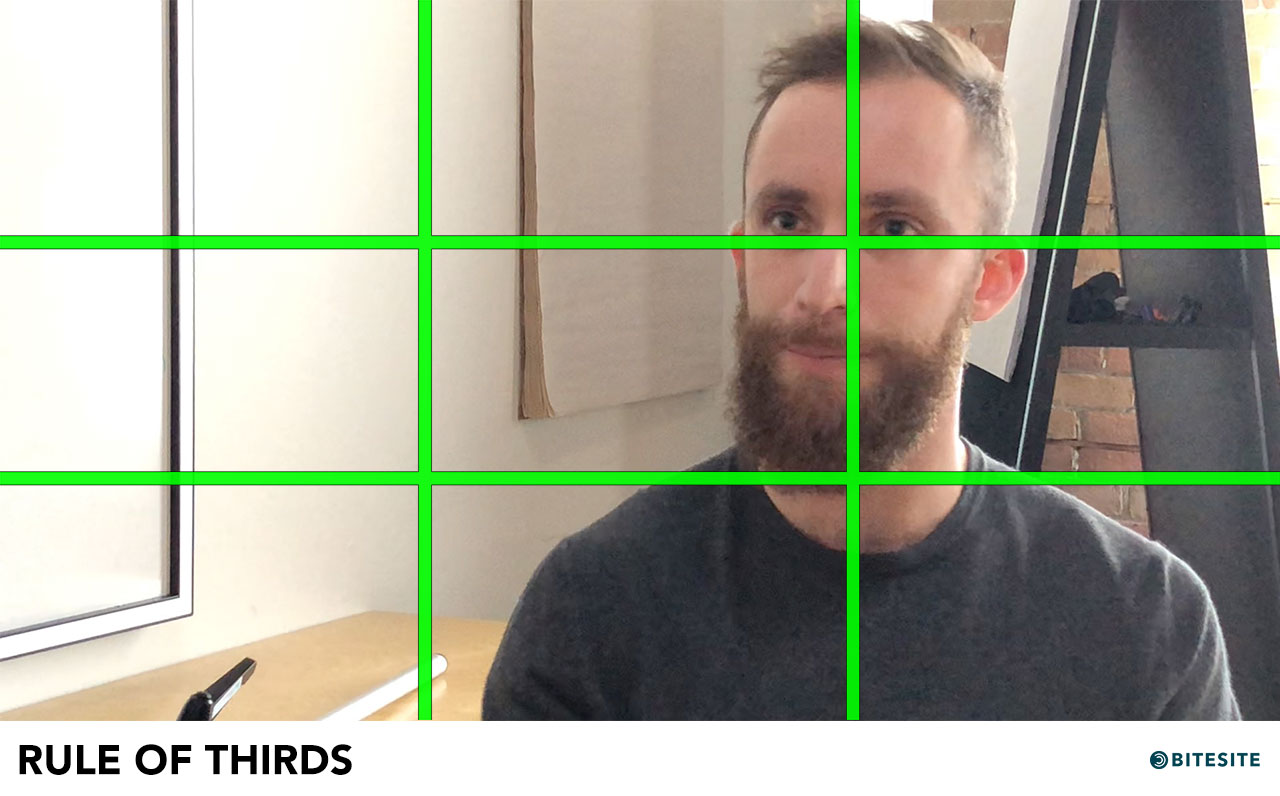 Have the interview subject look at you

Now, if you're a one-person team, you'll still want to sit in a position where you can occasionally glance at the camera to make sure everything is recording ok, but spend the majority of your time just talking and engaging with the subject.

Rules are made to be broken

It should be noted that these rules are broken all the time - but they are done so with motivation. So if you're just starting out, it's better to learn these rules and get used to them until you have more experience and a motivation to break them.

You will hear this time and time again: audiences will forgive bad video but not bad audio. It's true, without fully realizing it, and surefire sign of a amateur video is bad audio. So to separate yourself from the masses and to really up your game, you should improve your audio.

The key to getting good audio is to get your microphone as close to the interview subject as possible. Now, moving your camera closer will already improve results, but it most likely won't be enough.

If you don't want to invest that money but have another smartphone lying around, check out Wistia's article on shooting video with a smartphone. They have a great tip on placing a second smartphone close to the subject and recording the audio with a app like Voice Memos. You'll have to do some work in post-production to sync up the audio, but the results will be worth the work.

If you want to hear the difference a lavalier microphone can make, check out the video above.

The last tip for making your interviews look and sound better is to light your interview subject. A lot of times videographers will place an interview subject wherever is most convenient or just based on the background. However, if you spend 5-10 minutes looking around, you'll probably find a space that will have better lighting.

A good rule of thumb is that you want to find a place that has a LOT of light. Big offices are usually good because they have a lot of overhead lighting, but if that's not the case, try to find a big window or even consider doing your interview outside. A big bonus is if the light is coming from one direction light through a window. That way you can position your subject in a way that will create a light on their face.

If you are dealing with overhead, harsh lighting, watch out for unflattering shadows under your subject's eyes and nose. Moving the subject slightly forward or backward can usually solve this.

Finally, if you have some money to spend, you can actually do a lot with a small LED light like the Neewer 160 LED Panel which goes for about $35 CAD. If you need a light stand, you can also pick one of those up for $25 CAD here.

Check out the images below for some lighting ideas: 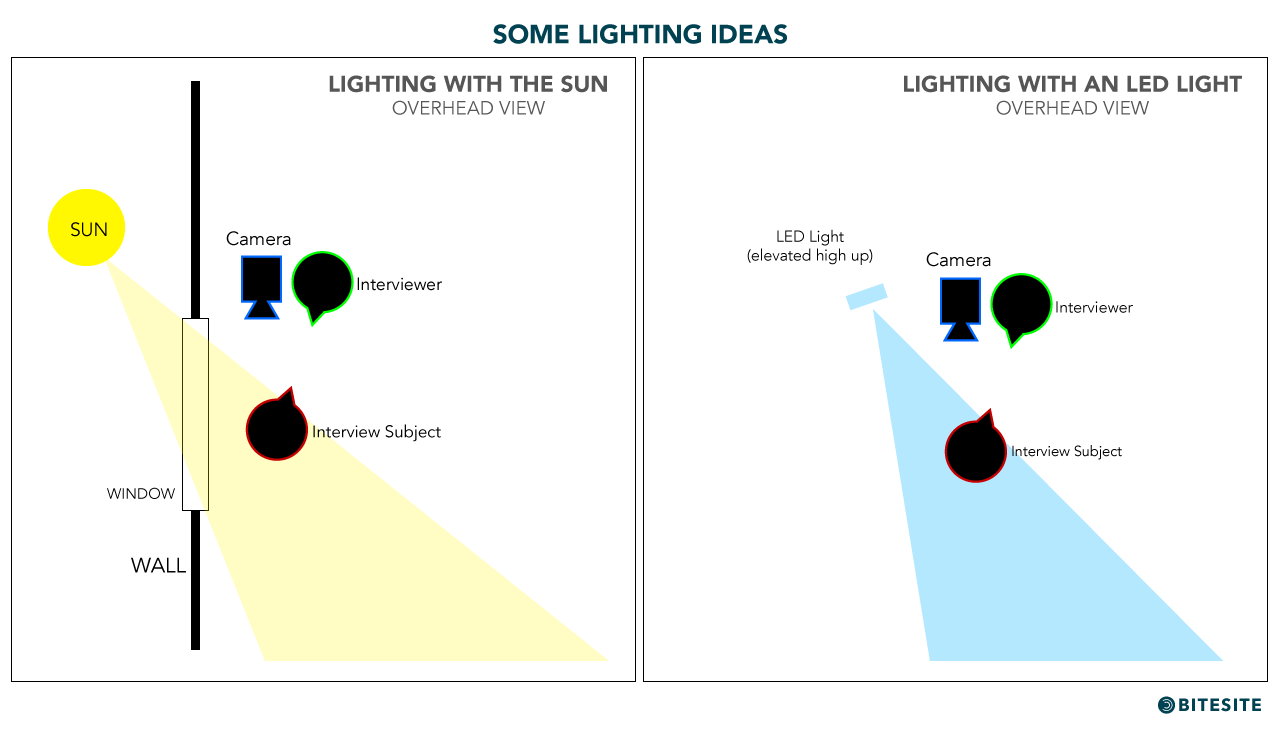 As we mentioned, interviews are a key part to a testimonial video and getting better interviews will definitely give you a better end product. While there are many things to consider when getting good interviews, the 3 tips above are a good place to start.